This Sci-Fi student film won the Derek Freese Award at Temple University’s 17th Annual Diamond Screen Festival. The film is currently still in post-production but there is an early rough cut available to view. Please see the link above for contact information.

On this film, I executed the DP’s plans and managed the G&E crew (which ranged from 5 to 10 people). A majority of this film required night exteriors (the entire film was overnights) and half of which was filmed in the dead of winter!

And below we used a 575 HMI through a silk as our key with a bare kino bulb on the wall as both art and ambience for the background (sci-fi!). We also had a reflector on the opposite side for fill. 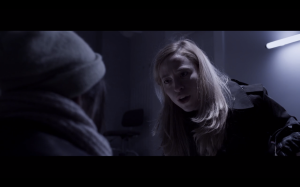 This long take below was simply 2 575 HMI’s with full CTB outside aimed down towards the door. Just outside were a steep staircase and a railing so we had one on a lowboy and the other on a cardellini. This was actually a long take and you can see the spotted practicals in the hallway in the other photo. We also used a tiny bit of haze to get the beams from the flashlight (which I offered up as prop! hah!). 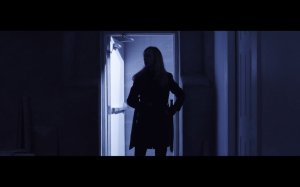 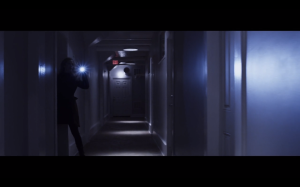 These last two shots were a little simpler. Just an HMI and 1k through some silks. Plus a tricky Arri 300 w/opal to rig inside the door. Due to the awful winter weather, we actually ended up filming these later on in the semester so it wasn’t freezing outside!