This project’s screen play won ‘Best Short Form Screenplay’ at Temple University’s 17th Annual Diamond Screen Festival. Although it’s still in the post-production phase, you can find additional information at the link above.

These first shots (in fact all of these outdoor scenes) were about manipulating sunlight. I used a 4×4 bounce board – sometimes through a 4×4 of opal. Super simple for beautiful images! The first I bounced onto their faces, the second on the mailbox (which was built by an amazing art director, Laura Revelt). 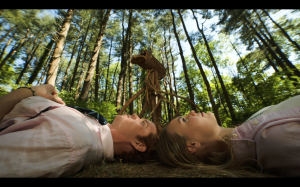 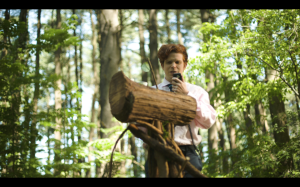 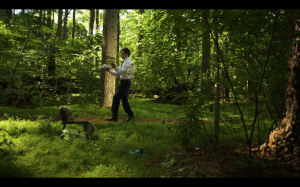 The indoor scenes were a little more complicated. This one below involved simulating a TV screen flashing on the subject’s face. After trying several methods, I ended up attaching a reflective gel on my arm and jiggling it, bouncing an Arri 300 with CTB. We also had a 2×2 daylight kino for fill. This was one of my most successful attempts at simulating a TV screen. 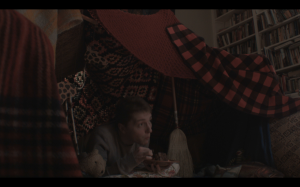 The office shots were much more complex but we also had some expressive control on these. We attached some spotty/low wattage bulbs up top with some opal. The background we threw in a 1k with a flag for the slash. We also had to play around with those blinds in the background to get the right exposure and not throw off the frame.

These office frames below were also a blast to shoot. We had a 2k with red gels that I spun by hand to simulate an alarm as my team ran around me in circles with the cable. You’ll definitely have to watch the film to get the effect! In the 2nd frame, we had a 650 through a red gel for the soft red fill, red practicals in the ceiling and a small battery powered LED with a white bounce in the suitcase itself. 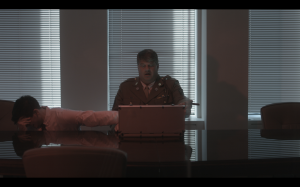 And this last frame we added some expression in the background again. Just a sidelight for some nifty shadows in addition to the practicals up top and a kicker on the far left. 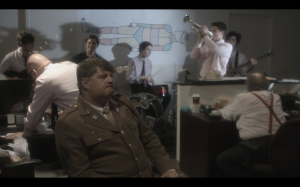